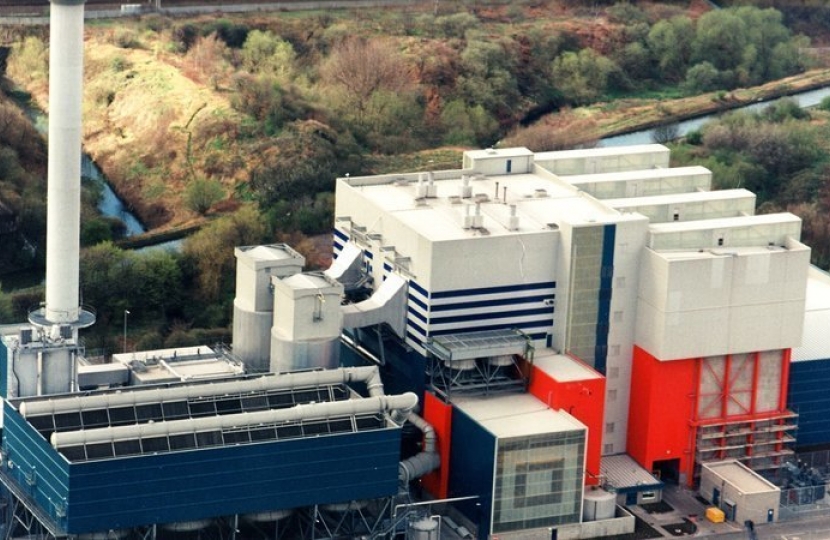 Basildon Conservatives first became aware of Clearaway's plans in May last year and immediately denounced them as "ludicrous", with local Conservative Pitsea councillors launching a petition against the proposals, which was supported by local Conservative MP Stephen Metcalfe MP, who said: "I join my council colleagues in opposing this plan. It can't be right that as we try to improve our air quality and clean up our environment that the only way to deal with our waste is to burn it."

Having taken back control of Basildon Council in May, Councillor Baggott felt it was important to reiterate to Essex County Council the strength of opposition locally. As the lead authority on waste disposal, County Hall has a statutory duty to determine planning applications for such facilities. In his letter to Councillor Bentley, he said:

“On behalf of the Council, I would firstly like to reaffirm our strong objections to the proposal... I would also like to reiterate the Council’s belief that it would be appropriate and proper for the upcoming meeting to determine the above planning application on such an important matter for the borough to be held in the borough and not at County Hall in Chelmsford, in order that the decision is before residents who would be most impacted by the application and to ensure that Basildon residents and businesses are not deterred and prevented from being able to make representations.

We believe that the meeting should be held within the Basildon Borough and be accessible and would be willing to work with yourselves to facilitate the meeting being held at an appropriate venue within the borough, such as the St George’s Suite at the Basildon Centre, the Basildon Sporting Village or Wat Tyler Country Park."

This letter to the County Council follows on from the passage of a resolution at Full Council in October 2020 - which the then Conservatives Opposition supported - which agreed that the then Administration would be authorised to write to Essex County Council, asking for a commitment to a full public consultation on the proposals and to invite the committee to tour the area in advance of any consideration of the Clearaway plan, further requesting that any such meeting to make a decision on the application be held at a venue in Pitsea. The new Conservative Administration has now repeated that request and we await Councillor Bentley's response.

It is disappointing, therefore, that Opposition parties in Basildon continue to try and play cheap political point-scoring with this vital issue, seeking to force an expensive Extraordinary Council Meeting later this month to debate a second motion on Clearaway’s proposals. This requisition request was cynically submitted after noon on July 22nd, the day of the last meeting of Full Council, deliberately to ensure that the matter could not be debated as an emergency motion at that meeting but, rather, force a costly Extraordinary General Meeting to have to be convened.

Due to ongoing Covid-related issues, meetings of Full Council are currently having to be held at the Basildon Sporting Village, which incurs costs to the taxpayer of circa £6-7,000 per meeting. This request has rightly been refused by the Mayor, as pointless duplication of the first motion and a wholly unnecessary cost to the taxpayer.

We do not believe that thousands of pounds of public money should be spent on political stunts. We have said all along that all parties in Basildon are united in their trenchant opposition to any waste incinerator anywhere in Basildon Borough and it is disappointing that Opposition parties continue to seek to grandstand at the residents’ expense, when we could all be working together, as Basildon Conservatives have sought to do throughout. We would stand a much better chance of defeating these plans if we all spoke with one voice and we urge Opposition parties to put aside political differences and support the Administration in opposing Clearaway's plans.