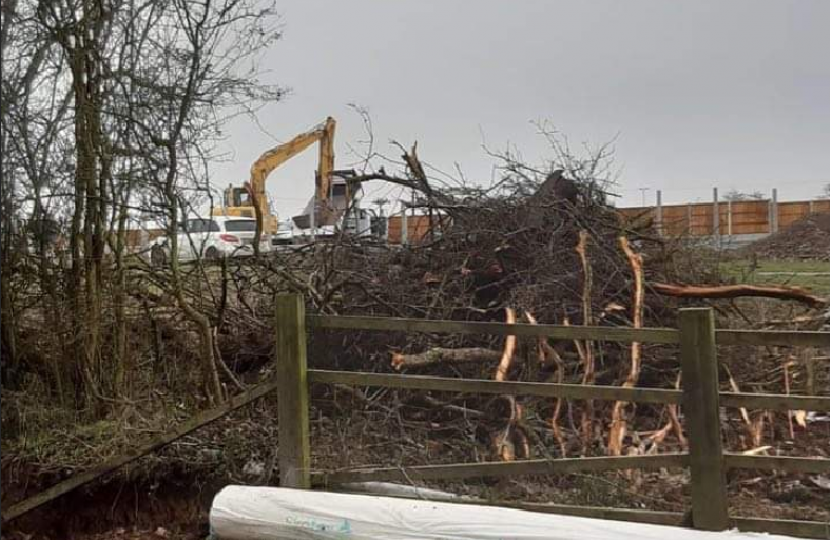 Unauthorised development goes ahead despite local community warnings to the Council on Friday evening.

This has been an ongoing issue, with Labour and their Independent backers failing to act, despite talking tough. Notwithstanding numerous communications from the local community and the local ward councillor, George Jeffery, as predicted, over the weekend the area has experienced large-scale unauthorised development.

To seek to remedy this, Councillor Jeffery requested that Basildon Council issue a temporary stop notice, which would have been able to immediately halt work on the land. It is feared that an estimated total of thirty caravans (or mobile homes) could be placed on it.

Basildon Council failed to deliver any enforcement notice to halt this development to protect the local community and the Green Belt until Sunday. This is even after the Leader of Basildon Council stated the day before that Planning Officers “are working around the clock” and that “every legal option available to them” would be used.

“It is deeply disappointing that this situation has been allowed to continue for as long as it has under this weak Administration, who have repeatedly failed to act on concerns about unauthorised development." ~ Cllr George Jeffery

Both Labour and the Wickford Independents made election promises and talked tough on dealing with unauthorised developments in the Green Belt but, instead, they have allowed it to escalate and get out of control, ignoring planning breaches until it is too late, and irreversible damage has been done. The Council should be proactive not reactive.

The unauthorised development at Hovefields over the weekend has continued at pace, with a constant stream of lorries dumping hardcore and diggers continuing to work on the land due to the delay in issuing the Stop Notice. Essex Police are at the scene, monitoring the situation due to the large number of individuals on site breaching Covid regulations in addition to the planning laws.

Cllr George Jeffery (Con, Wickford Park) said: “It is deeply disappointing that this situation has been allowed to continue for as long as it has under this weak Administration, who have repeatedly failed to act on concerns about unauthorised development. It took until Sunday for the Council to claim that they have belatedly issued a Stop Notice - too late, as the damage has been done. Even after requesting on Saturday that a temporary notice should be placed on the land to halt development until the Council is able to get into court. Their inaction has sadly resulted in significant development being allowed to continue, when this could have been prevented by issuing this notice much sooner. Furthermore, the Council has determined that it is not necessary update me as the ward councillor to whom residents turn for information. This is typical of an Administration that really does not care about residents or the law.”