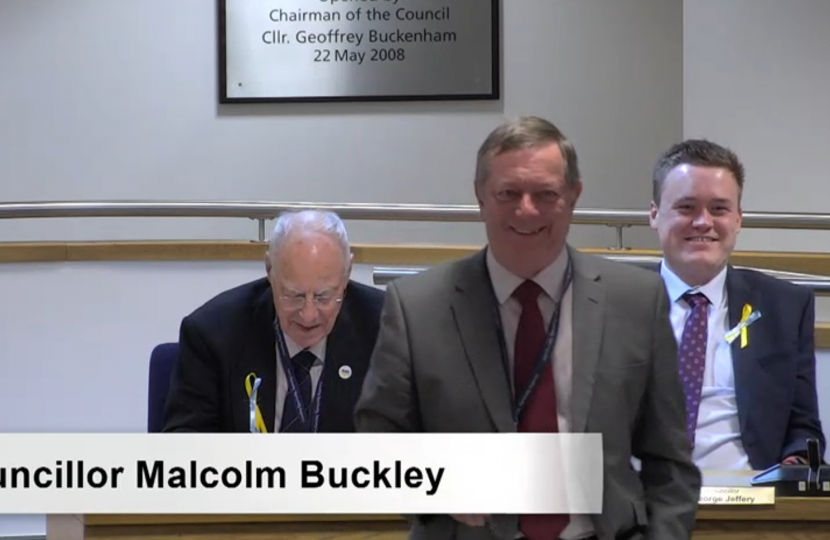 Wickford Councillor was first elected in 1988

Cllr Malcolm Buckley (Con, Wickford Castledon) has announced that he will be standing down at the local elections in May, having served the people of Wickford on Basildon Borough Council for 30 years, including serving as Leader of Basildon Council from 2002 to 2009.

Malcolm was originally elected as a Councillor for Wickford South at a by-election in 1988, overturning a Liberal majority of more than 1,000. He was re-elected in 1992, becoming Deputy Leader of the Council under the late Tony Archer, serving as his deputy until 1994. He was re-elected in Wickford South twice more, in 1996 and 2000, until boundary changes in 2002 led to the abolition of the seat. Malcolm was then elected to the new Wickford Castledon seat, also becoming Leader of the Council. He served as Leader until 2009 and during this period he oversaw huge regeneration projects delivered across the Borough and delivered the Basildon Sporting Village, which has gone on to train British Olympians.

"The residents of Wickford will miss him as an exceptional ward councillor and he has always been a very good friend and advocate for the whole borough." ~ Cllr Andrew Baggott, Leader of Basildon Council

He then went on to serve in a number of frontbench roles under his successors and was re-elected in Wickford Castledon on two further occasions, in 2006 and 2010. He was also elected to Essex County Council for the Wickford Crouch Division in 2013. He lost his borough seat in 2014 but returned in 2018. Malcolm's late wife, Sylvia, also served alongside him as a borough councillor in Wickford for nearly 20 years until her sad death in 2013.

Malcolm was re-elected to Essex County Council last year and is currently Cabinet Member for Waste Reduction & Recycling but, after 30 years of service, he has decided to stand down from Basildon Council. He does so with the thanks of the entire Conservative Group for all his long and dedicated service to the Party, to the Borough but most of all to his beloved Wickford. He has stuck with us through thick and thin - at one point in the late '90s being the only Conservative councillor left on Basildon Council.

"Malcolm's service to this borough has been phenomenal." ~ Cllr Luke Mackenzie, Deputy Mayor

After Malcolm's final meeting of Full Council, held last night, the current Leader of the Council, Cllr Andrew Baggott, said: "We are extremely sad to be losing Councillor Buckley. Malcolm will be missed. He has been steadfast in his commitment to serving the residents. The residents of Wickford will miss him as an exceptional ward councillor and he has always been a very good friend and advocate for the whole borough. We thank him for his service."

The Deputy Mayor of Basildon, Cllr Luke Mackenzie, remarked: "Malcolm's service to this borough has been phenomenal. He was first elected in 1988, when I was just two years old! When I was first elected in 2008, he helped guide me through the Council and showed me how to be a good councillor. I wish him well for the future."

Local man, Alex Myers, will be standing as the Conservative candidate to succeed Councillor Buckley in Wickford Castledon at the local elections in May.