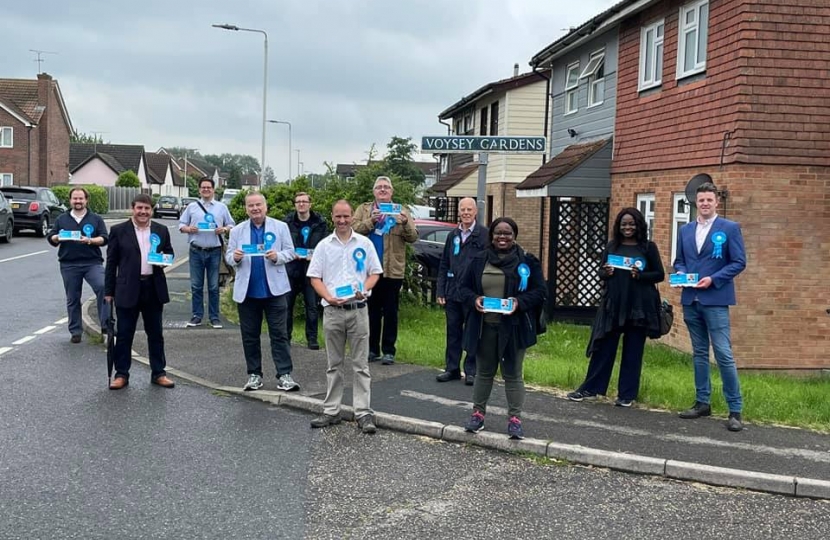 Basildon Conservatives were celebrating this weekend following our decisive victory in the Pitsea North-West by-election last Thursday. Despite a low turnout, the Conservative candidate romped home with 57% of the vote.

Local man Stuart Terson, who had come close to winning the seat at the May local elections, has now been elected a councillor for the ward in the by-election. He has won the first Conservative seat in Pitsea North-West Ward, complimenting the three seats we presently hold in the neighbouring Pitsea South-East Ward. Add to that the seats we now hold in St Martin's, Vange, Langdon Hills and Laindon and it is clear that Basildon Conservatives are the Party of Basildon. Stuart's victory means that we now hold twenty-five of the Council's forty-two seats, with Labour now on just eleven seats and six Independents. This means the current Conservative Administration now has a clear majority of eight seats over the Opposition groups on the Council. 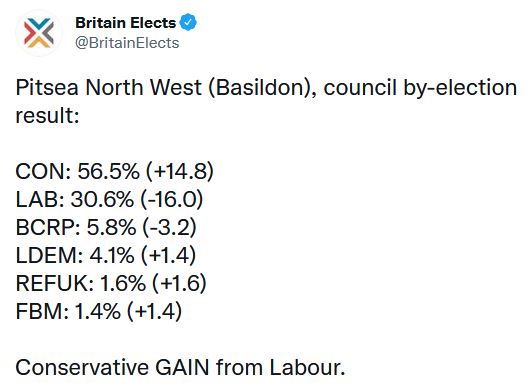 Cllr Andrew Baggott, Leader of Basildon Council, (who previously represented the seat himself for eight years from 2004 to 2012), was ecstatic at the result, saying: "I am delighted to welcome Councillor Terson both onto Basildon Council and the Conservative Group. I have no doubt he will be a tremendous asset to our growing team of hardworking local councillors and will provide Pitsea North-West with a strong local voice to champion their interests."

This expensive and unnecessary by-election was triggered by the sudden resignation of former Labour leader, Gavin Callaghan, who resigned just weeks after being successfully re-elected to Basildon Council in May. The Labour-led alliance failed to retain control of the Council, however, and apparently Mr Callaghan failed to inform the voters that his acceptance of another term of office was contingent upon him being Leader of the Council. Astonishingly, he recently put out a letter to his former constituents explaining - with uncustomary frankness - that the gig of representing them did not pay enough. He made no secret of the fact that he has resigned to pursue more lucrative job opportunities and it was about the only honest thing in his letter, which was otherwise laden with lies (including eight bullet points outlining things the Conservatives had allegedly done since gaining office, not a single one of which was true).

He also championed the virtues of the Labour candidate, Aidan McGurran, in what is already being dubbed 'The Kiss of Death Letter'. Mr McGurran, a former Labour councillor for Pitsea South-East (2012-16) and Mr Callaghan's rottweiler during the last administration, lost his seat in Vange to the Conservatives in May. Despite Mr Callaghan having narrowly won the seat with a majority of 114 votes, Stuart Terson was elected with a majority of 364. Reacting to his defeat with customary magnanimity, Mr McGurran called Stuart and all the working class voters who elected him "Class traitors" and said "come the day they will meet their fate". Nice. It remains a mystery why this delightful person was not elected. Apropos of nothing in particular, class warrior Mr McGurran is an ex-newspaper editor who lives in a rather large and well-situated house in leafy Billericay. Make of that what you will.

The other parties made little impact, including the nascent Basildon Community Residents Party (BCRP) - in reality, a hard-left front group led by Corbynista rejects from the Labour Party - who came in third, with their candidate Jake Hogg receiving only 82 votes and a share of the vote that was more than 3 points down on May. Pat Rackley, herself a former Labour councillor and BCRP candidate, made a remark on their Facebook page that the result was "Not bad in view of the fact that we made very little effort in the by-election". Quite an amazing statement to make for a supposedly up-and-coming new party. If they could not muster a half decent campaign for a by-election, it is hard to see them usefully contesting next year's local elections. 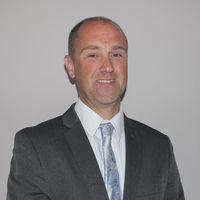 Stuart Terson, meanwhile, ran a clean campaign, focusing on local issues. Having lived and raised a family in Pitsea over the past twenty years, Stuart was primarily concerned with tidying up Pitsea's housing estates, tackling fly-tipping, dumped shopping trolleys, e-scooters and fighting against Clearaway's proposed Pitsea Incinerator and to preserve green spaces. He has also worked with colleagues on highways maintenance issues and supported the campaign to get the new Pitsea Swimming Pool opened early next year - priorities that clearly resonated with the electors.

"Thank you to my family, friends and colleagues and especially the residents of Pitsea North-West for putting their trust in me! Now the work begins." ~ Cllr Stuart Terson

Councillor Terson said: "Over the last six weeks or so, we knocked on probably every door across Pitsea North-West, speaking to residents and getting first-hand what is good about where they live and what is bad. I live and work in Pitsea with my wife and teenage children and I want to improve the town. I want us all to be proud of where we live and this means working together. I am honoured to have been elected and promise to always listen to the residents, to do my very best to help them and meet regularly with residents, local groups and schools to talk about what we all want to see done in Pitsea." He added, "Thank you to my family, friends and colleagues and especially the residents of Pitsea North-West for putting their trust in me! Now the work begins."