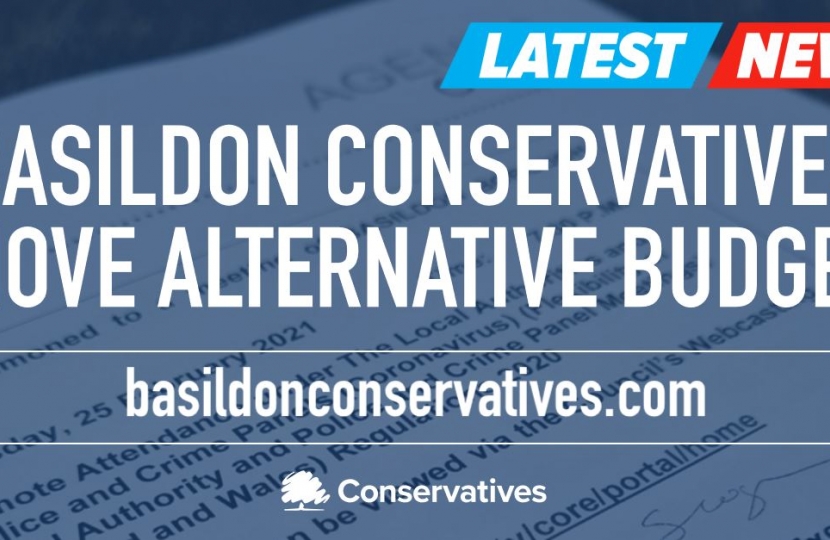 At Basildon Council's budget-setting meeting last night, the Conservative Opposition moved, as we always do, a fully-costed Alternative Budget, prepared in consultation with the Council's Chief Financial Officer (known as the Section 151 Officer) and signed off by him as a viable, sustainable and fully implementable alternative to the Administration's proposed budget.

While we welcome the fact that the Administration of Basildon Council will match Conservative-run Essex County Council in freezing their part of the Council Tax precept, we would like to be more ambitious. In recognition of the enormously difficult times everyone has had to ensure during this terrible pandemic, Basildon Conservatives proposed to CUT the Council Tax by 2% for all residents. This would be funded by cancelling Labour boondoggles like the risky multi-million pound Youth Zone, scaling back the Town Centre 'Disasterplan', and repurposing the funding set aside by the Administration to promote their naval-gazing obsession with turning Basildon into a unitary council. We do not believe that these schemes serve the real day-to-day priorities of residents.

Key investments would include:

There would also have been money ring-fenced for renovation of our estates, including zero carbon and fuel poverty measures, and improvements to our halls and community facilities. There was also funding for specific projects in every part of the Borough, including Langdon Hills Recreation Ground, Wat Tyler Country Park in Pitsea and Westlake Park in Bowers Gifford, Wick Country Park in Wickford, Lake Meadows and Hannakins Farm in Billericay and, of course, our absolute commitment to re-open Laindon Community Centre.

Sadly, these measures were rejected. Additionally, the Conservatives sought to reject the Administration's proposed above inflation hike in social rents by 1.5% and instead limit any rise in line with inflation, as well as put in an additional £300k for discretionary housing payments. Sadly, this too was rejected by Labour and Independent councillors.

"The Leader of the Council is a very good speaker but snake oil is still snake oil." ~ Cllr Andrew Baggott, Leader of Basildon Conservatives

Cllr Andrew Baggott, Leader of Basildon Conservatives (making a welcome return to the Council following his recent illness), said: "The Leader of the Council is a very good speaker but snake oil is still snake oil. The Administration have produced a 'budget of the ego'. Lots of expensive publicity grabs to puff this beleaguered Leader's image and lots of misdirection and hyperbole around pet projects that the Administration are claiming have been 'delivered' simply because they have announced them, and previous promises that were not delivered before and are now being repackaged and represented like new. The residents will see through it."

You can read full details of the rejected Conservative Alternative Budget here.