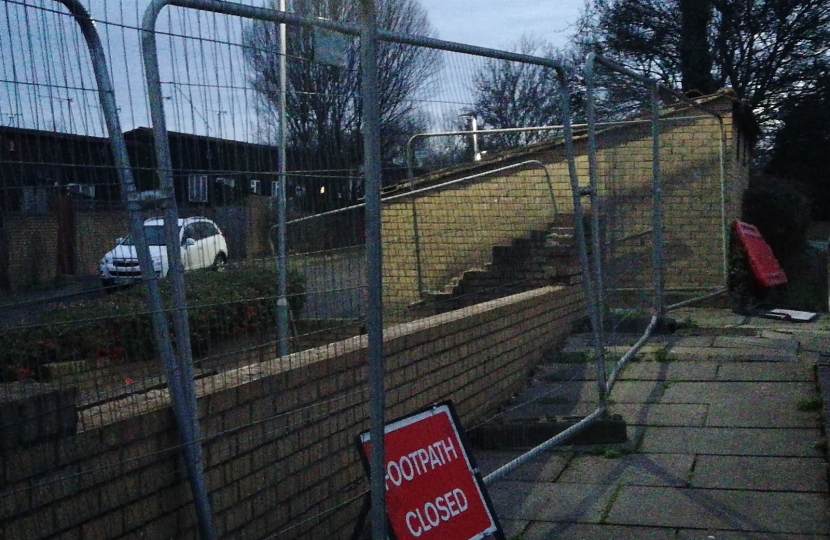 Since joining the Conservative Party I have been lobbying colleagues for redevelopment on the Langdon Hills Estate and tonight it was proposed that a £2 million investment be put into regenerating the environment and ensuring safety for residents on the Estate — only to be condemned by ‘Independent’ Councillors Smith and Clancy.

I’ve been visiting the Estate over the last few months talking to residents to better understand the issues that are causing them the most concern. Some of these concerns include: Bad or broken lighting, broken footpaths, unusable disabled ramps, derelict areas of concrete which used to accommodate a children’s play area — all in desperate need of repair.

One resident told me she has fallen down a walkway, not once but twice, due to bad lighting and a massive drop-curb at the end of the footpath causing her to break her arm. This is unacceptable! Why would the Labour-led Alliance not want to invest in the Estate to make it a safer place for families? This is a question I want to put to voters.

When visiting a young family I was told that their concerns are constantly ignored and that they don’t want their kids to play outside as they are opposite an unusable disabled ramp and the stairs adjacent are falling into a sinkhole. (See picture above.)

With the Conservative’s Regeneration Plan for Basildon prioritising the ‘forgotten estates’, Langdon Hills will form Phase One of a Borough-wide scheme to bring social housing estates in line with modern standards of safety, practicality and liveability for residents. One thing that can be taken from February's full council meeting is that the Basildon Borough Alliance cannot be trusted to invest in Langdon Hills.

Councillor Smith said in full council that the Langdon Hills Estate needed £4 million rather than £2 million without proposing a single improvement or policy idea.

I have campaigned since August 2019 for this investment. I am passionate about the safety of residents across Langdon Hills, especially on the Estate, and will do all I can to make sure this money is spent correctly the moment a Conservative majority is delivered to Basildon Council in May.

Charlie Sansom is a member of the Conservative Party and is standing for election in Langdon Hills in the Local Elections on May 6th, 2021. Contact: charlie@btconservatives.com